The City of Greenville is continuing to monitor the COVID-19 pandemic and take appropriate steps to limit the spread of the virus. City offices are currently open from 9 a.m.-noon on Mondays, Wednesdays, and Fridays, and from 1 p.m.-5 p.m. on Tuesdays and Thursdays.

The proposed Sycamore Hill Gateway Plaza will be built on the site where the prominent Sycamore Hill Baptist Church once stood. Incorporating iconic features, the gateway plaza will become a prominent western entrance to Town Common. Not only will the gateway plaza become a centerpiece to the park, it will also commemorate the history of the African American community known as “Downtown” that once inhabited the site now known as Town Common.

The “Downtown” neighborhood was a self-built, close-knit African American community that included homes, businesses, schools and churches. Sycamore Hill Baptist was perhaps the most significant and enduring institution in the “Downtown” community. 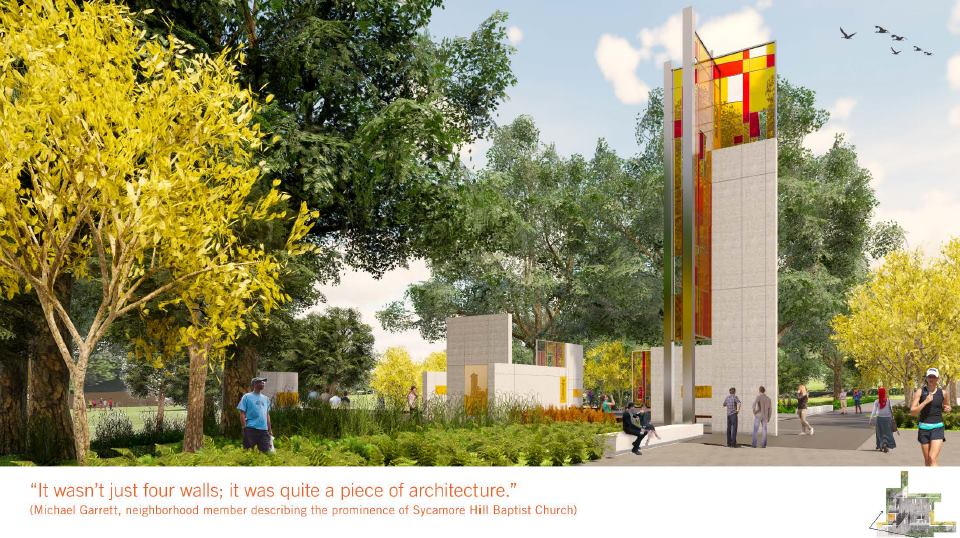 Community leaders that included teachers, school principals, businessmen/ women, lawyers, and doctors were patrons of the Church. In addition to religious purposes, the church was the center for social, political, and economic activity for the community. Descendants of the “Downtown” neighborhood all describe the area as a thriving and vibrant community with a high quality of life.

Historically, the Green Street Bridge, which bordered the western façade of the Sycamore Hill Baptist Church, was once the primary entrance into the central business district of Greenville. In fact, the beautiful features of the church were the first of architectural significance experienced by visitors upon entering the central business district of the city. Today, a small marker is the only reminder or mention of the vibrant African American neighborhood that once encompassed the area known as Town Common. The goal of the Sycamore Hill Gateway Plaza is to transform the western edge of Town Common into the prominent entrance that it once was while commemorating the history and memory of the “Downtown” neighborhood.