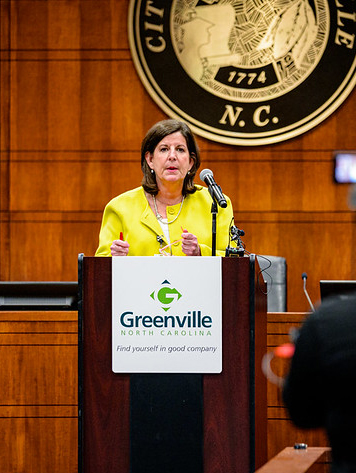 Ann E. Wall began her tenure as Greenville's City Manager on August 1, 2017. During her time in Greenville, Wall has provided direct oversight over the Police and Fire/Rescue Departments along with the City's Public Information Office and the Office of Economic Development. Among Wall's most significant accomplishments in Greenville is playing a vital role in the establishment of Pitt County's first-ever, public-private economic development partnership, the Greenville ENC Alliance.

Highlights from Wall's career prior to joining the City of Greenville include:

She received her master's degree in Public Administration from the University of North Carolina at Chapel Hill and a bachelor's degree in City Planning from the University of Virginia. Wall is a member of the International City/County Management Association (ICMA) and the North Carolina League of Municipalities. (NCLM). She serves on the NCLM Planning and Environment Legislative Action Committee.